The exhibition ,,Fashion of secession from the collection of Alexander Vassiliev “ (read) 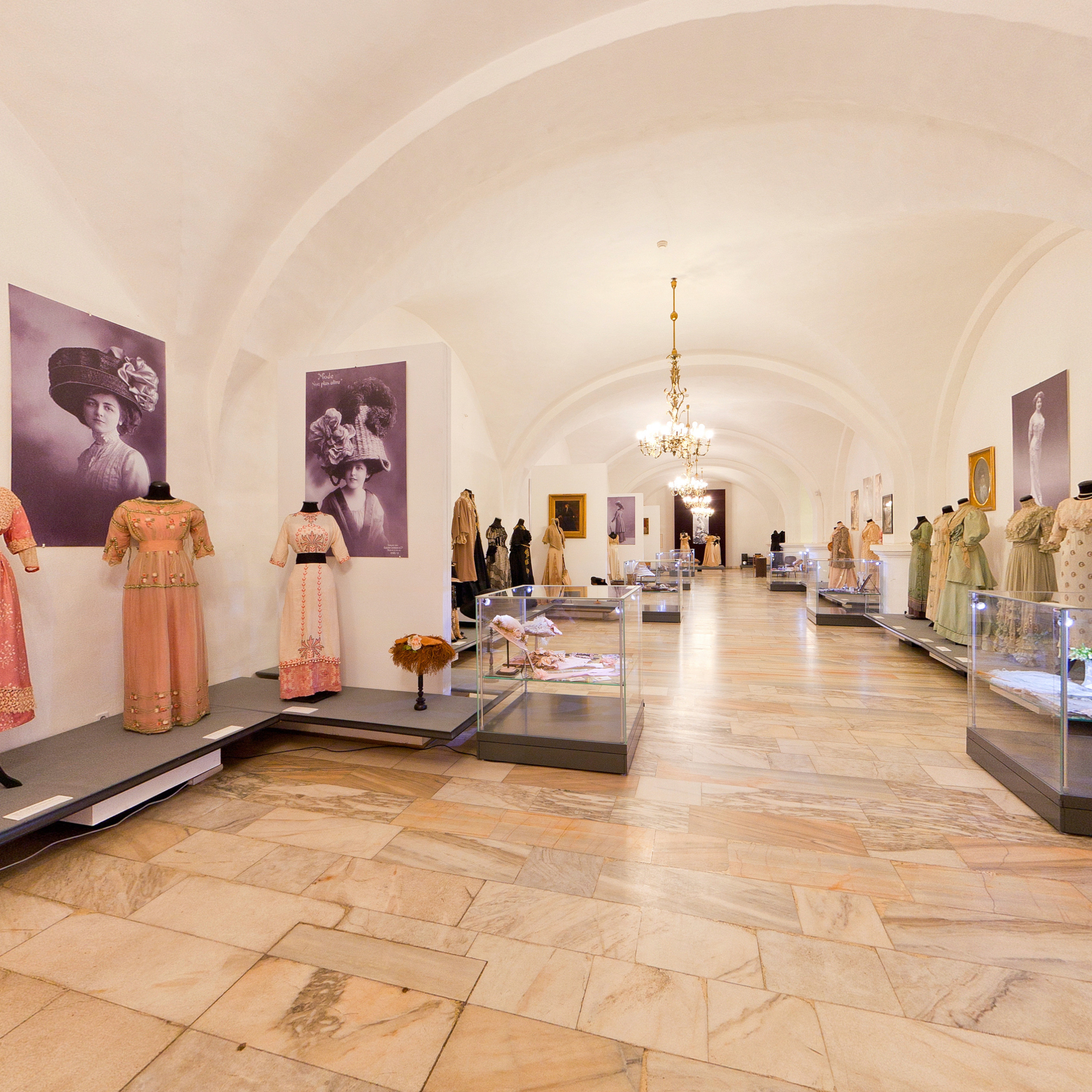 Relatively quiet, without wars, revolutions or military coups in the period from 1890 to 1914, which is called la belle époque, was interrupted by the new art nouveau style. It conspicuously launched at the World's Fair held in Paris, although that new art had been spreading since the mid-1890s. The new style appeared under the influence of new aesthetics based on a combination of utility and beauty, stylization of forms of living nature (especially aquatic vegetation, and marine wildlife), diversity of motives and their decorativeness, and asymmetry of patterns. It looked for inspiration in mystical medieval visions of art, symbolist literature, Oriental art, and national sources. Art nouveau did not last long, but spread throughout Europe at a fast pace. It reached America, even Japan. In every country it was slightly different. It was also called in various ways. The Germans and Latvians called it Jugend (in German Jugendstil means the youth style); Russians called it модерн borrowing the French word moderne which means novelty and recency; and the Austrians, Poles, and Lithuanians called it secession (in German Secession means "parting"). This is what the new generation of artists that entered the new century looked for, namely – isolation, parting from eclecticism of styles, postulates of historicism, and rigid forms of academicism.

At the end of the 19th century, the fashion of clothes also underwent changes because of the emergence of the new artistic currents, giving preference to delicate pastel tones of nature – water, clouds, sand, young grass, and modest spring flowers. Misty tulle, fog-coloured muslin, milk-white foam lace, faded flowers – all of which were adorning a slender lady leaning forward and creating in her its unique image. Nevertheless, the position of women in society did not change as they were totally dependent on their husbands’ and spouses’ income, and did not have the right to participate in elections, to apply to the court for a divorce, or to pursue higher education or vocational training. Being at home all the time, they focused on family, housing, children, and their appearance. Being corset-wearers, they used to change their outfits several times a day, even if this procedure was difficult because of the numerous buttons, hooks, laces, and clips. Consequently, the fight for women's rights was closely related to changes in women's clothing.

At the beginning of the 20th century, talented designer Paul Poirot entered the world of fashion, in 1903 starting his business in Paris. Under his leadership and doctors' support, women gradually abandoned corsets. Poirot changed the silhouette of women's clothing, making dresses narrower and higher cut. In the world of fashion, it might have been compared to the collapse of tradition. The fashion colour palette changed as it was impossible to resist the fiery colours of costume-designer Léon Baxt's costumes for the touring Russian ballet. In 1909, fashion was as colourful as a rainbow. Green, purple, red, orange, and yellow tones and semitones were reminiscent of the paintings of Fauves. We can see women of the time as if alive in the posters of Alphonse Mucha and portraits by Gustav Klimt, the Secession leaders.

Secession art with its graceful lines, lush vegetation, mystical symbols and visions inspired to improve linear drawing and fonts, and changed the composition of graphic print, book design and poster functions. The ephemeral elegance of images and landscapes full of secrets typical of Secession significantly changed painting, and made more diverse the clothing of people not interested in elite fashion, thus giving them a lot of joy.

The tragic fate of the Titanic marked the coming end of la belle époque. In the post-war period, slightly geometric art deco style was established, which was also charming but in a very different way. Residents of Vilnius are already familiar with it from the previous exhibitions held in Vilnius by Alexandre Vassiliev, an art historian and collector.

Alexandre Vassiliev holds an exhibition devoted to the art nouveau fashion at the Museum of Applied Arts in Vilnius. Viewers are introduced to more than a hundred unique dresses of that period. All were created by designers, tailors and embroidery masters at famous European fashion houses – "The Worth", "Doucet", "The Paquin", "Cheruit", "The Rouff", "Poiret", "Babani", "The Fortuny" – and demonstrate to contemporary people the century-old fabrics, lace, cut of clothing, embroidery, applications and numerous accessories of women’s and men's fashion. Lots of exhibited shoes, handbags, hats, buckles, pins, studs, banquet notebooks, perfume flasks, fans, and many other accessories forgotten for over a hundred years were used to make life more beautiful and delightful for the eyes. They still see the influence of Secession on the whole world of artefacts that became not only influential but also attractive. Most of those ephemeral items are of amazing quality, durability, diligent decoration, accurate colour combinations, and overall colouring. The exhibition of clothing and accessories is complemented by numerous photographs illustrating the Secession style of fashion, paintings, and furniture matching the clothing of that elegant period.

Secession in clothing is closer to human beings than in other branches of art. Today that elegant, gorgeous style in the exhibition reminds us of the existence of such la belle époque, which was not afraid of theatrical signs in the environment, open and full-fledged life styles, and images of human love and youth.