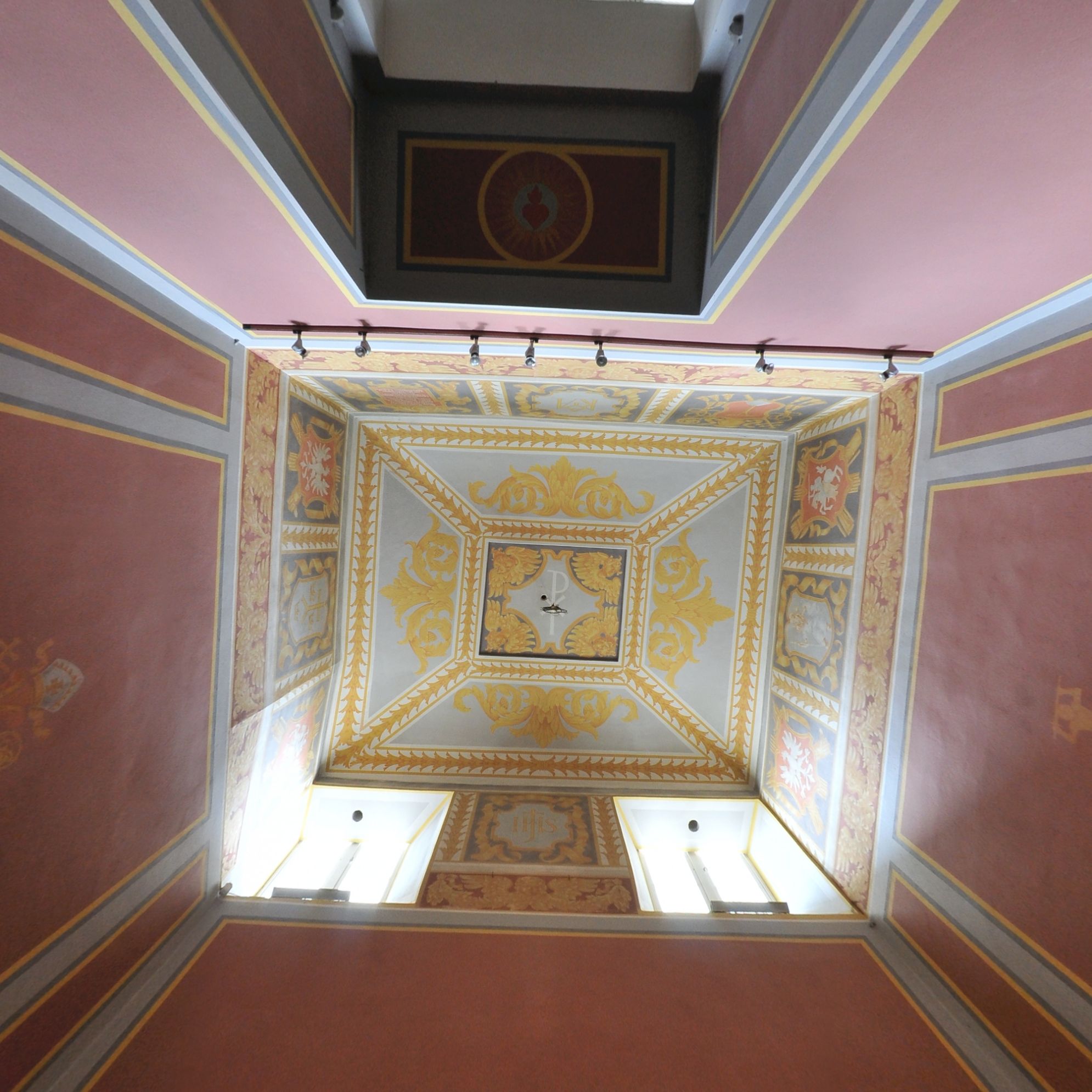 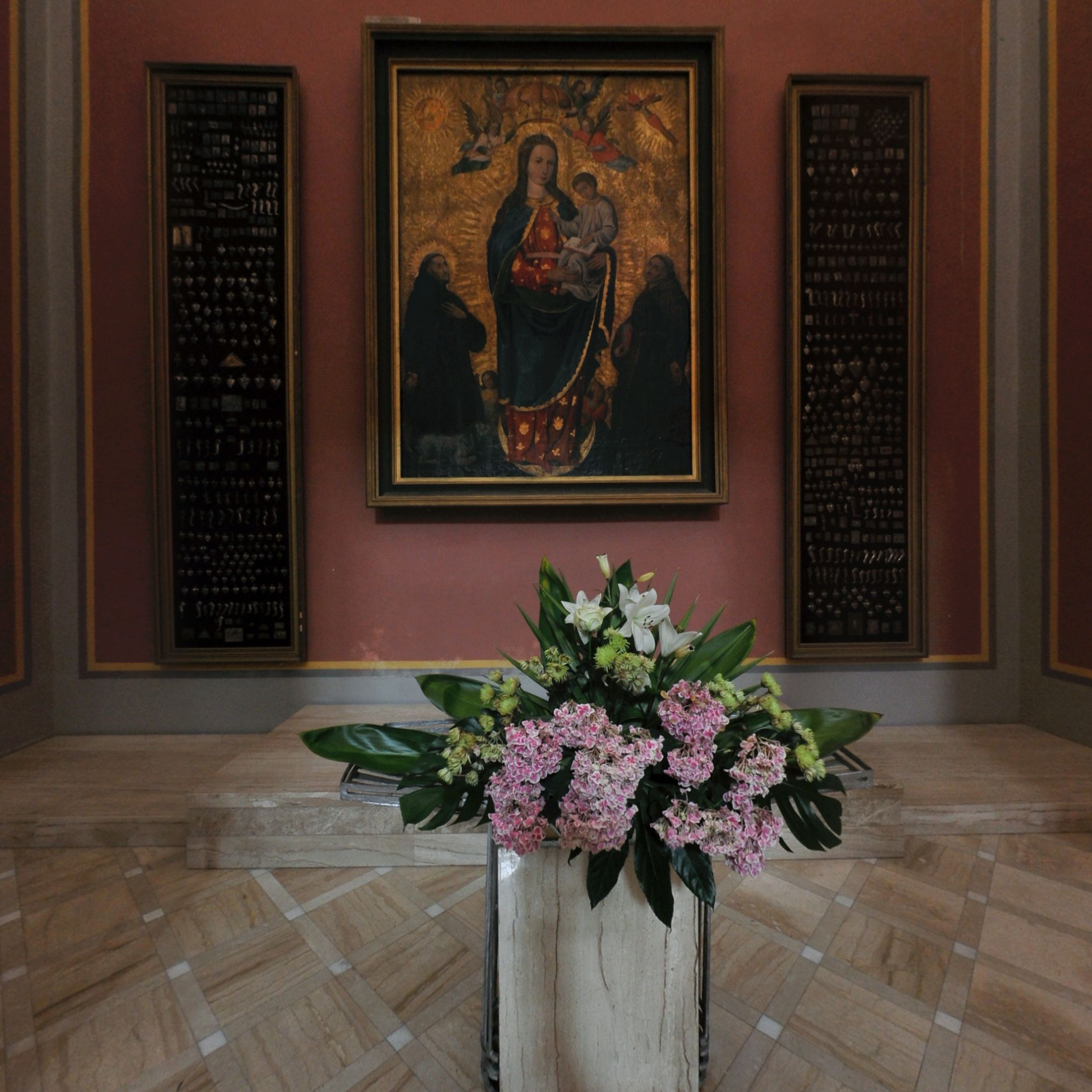 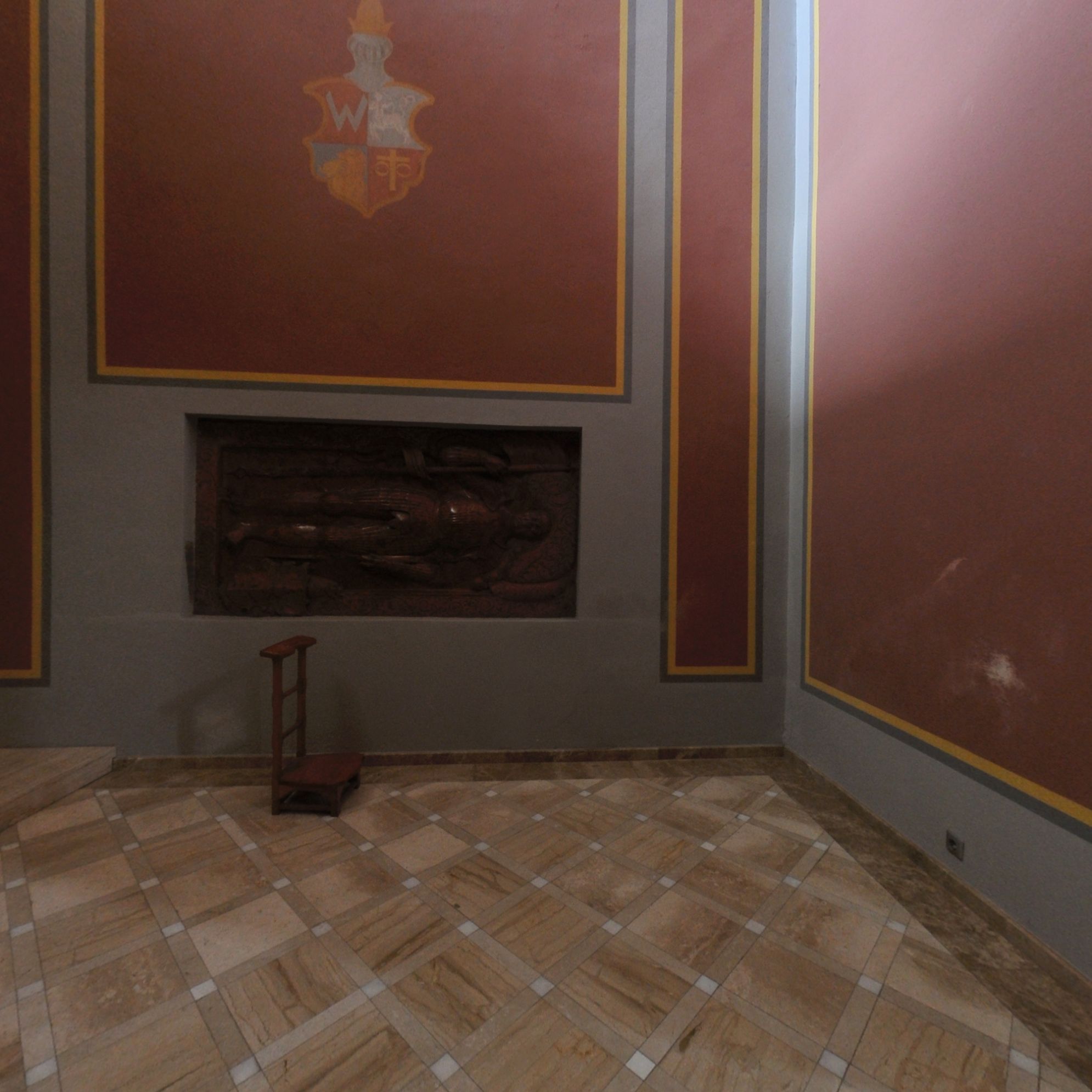 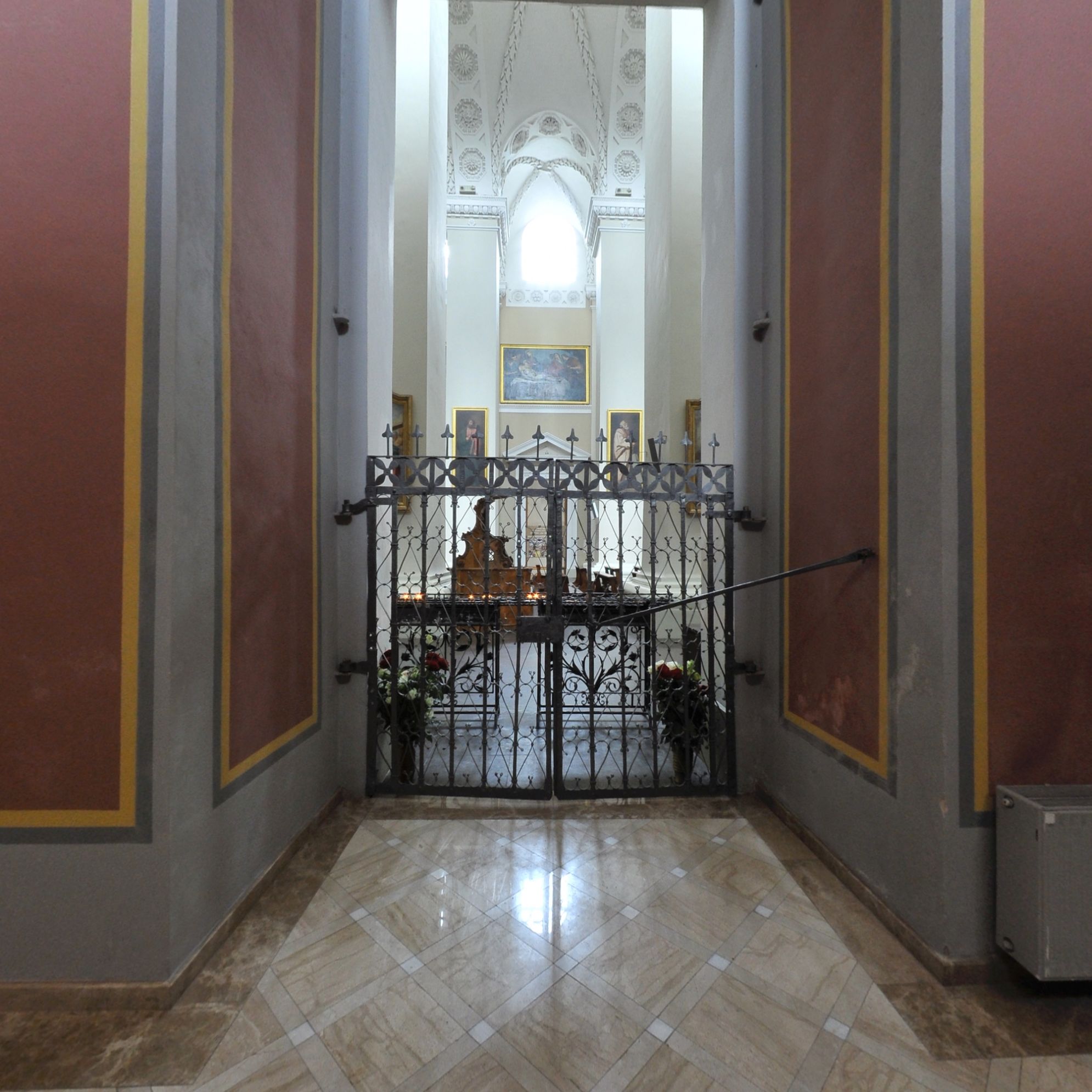 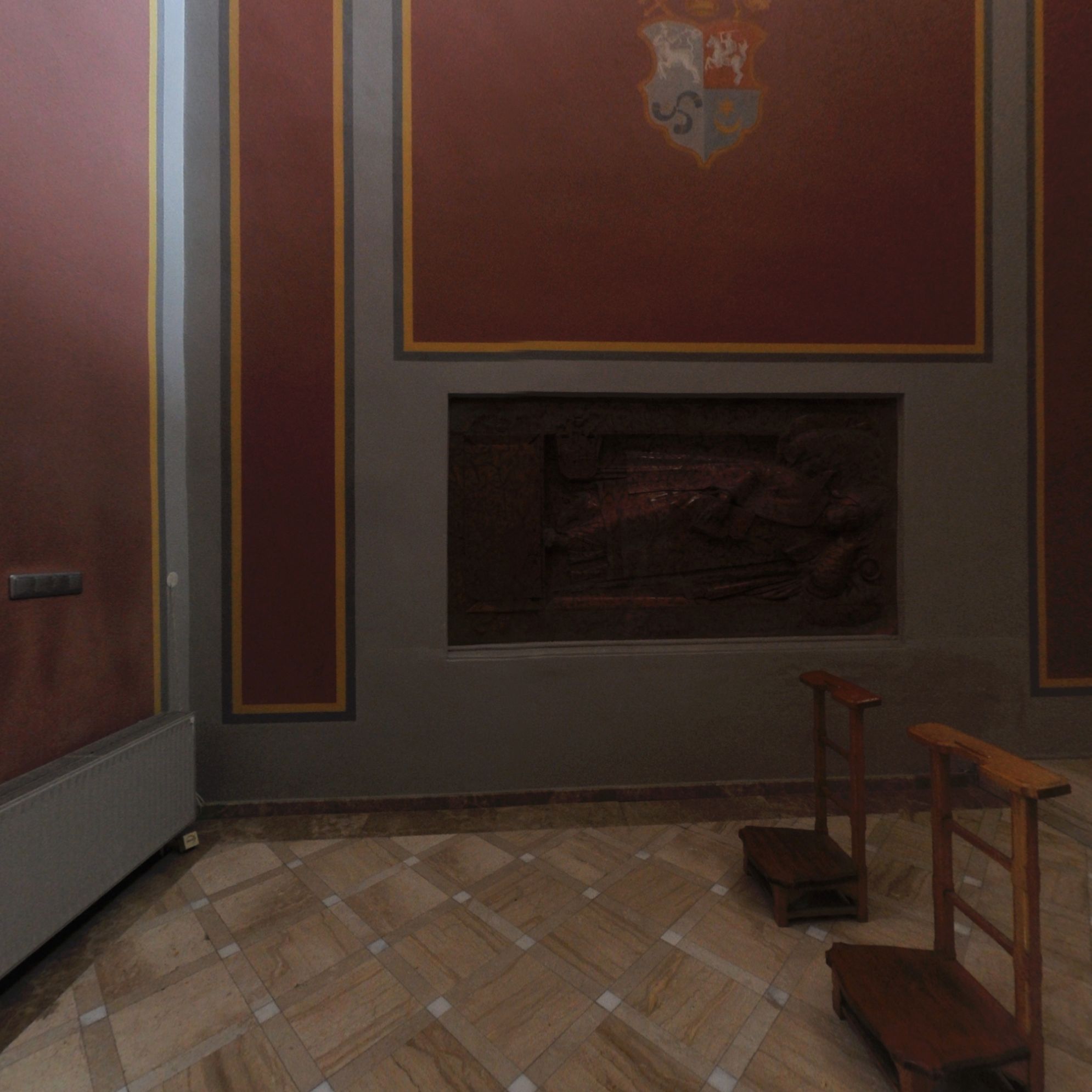 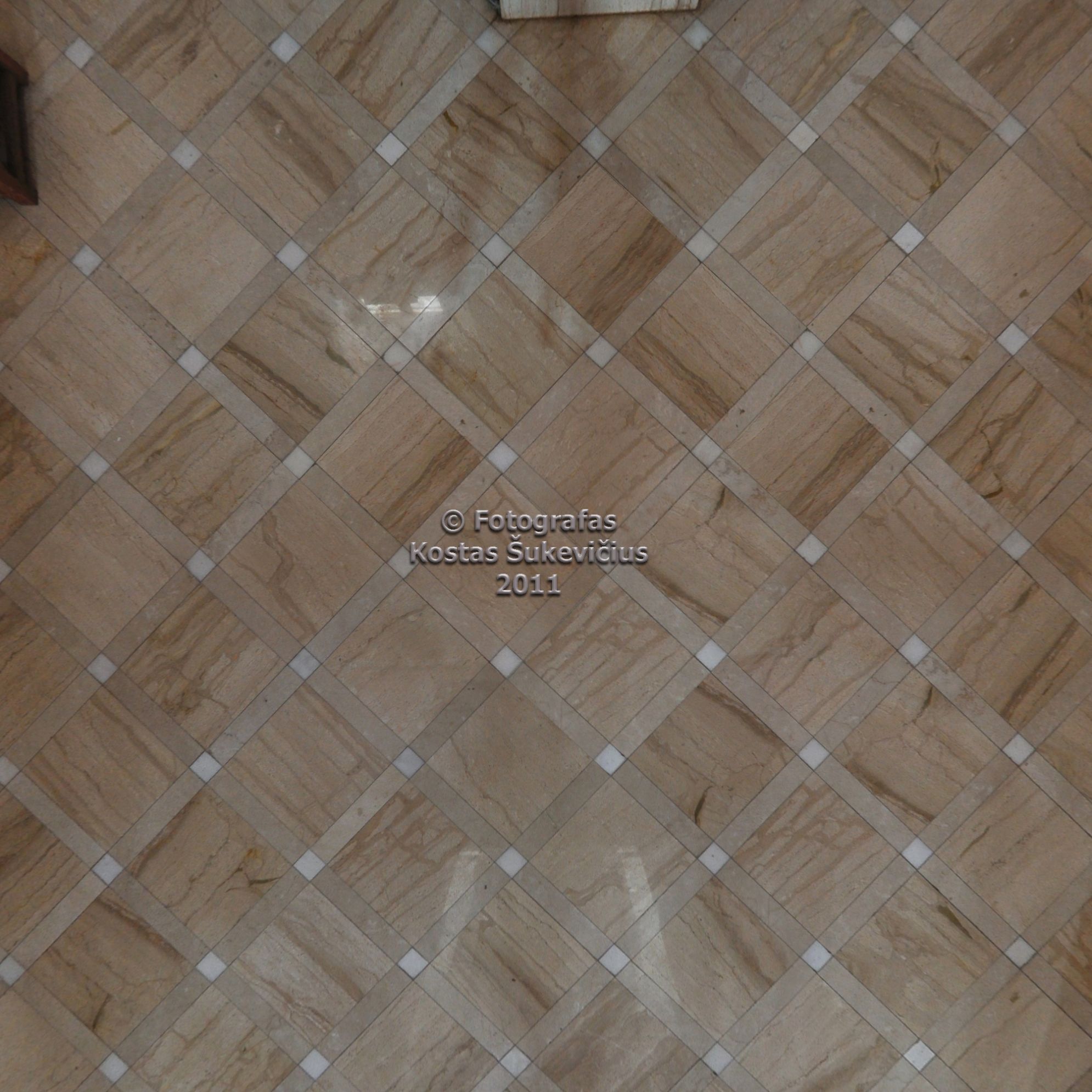 All panoramas of this object: Arch-cathedral Basilica (15)

There stood a sanctuary (supposedly Mindaugas' cathedral) at the western foot of Pilies hill surrounded by the old bed of River Vilnia in the middle of the 13 th century. It is thought that the first Cathedral could have been transformed into a pagan temple after the death of King Mindaugas in 1263. The square building was later completely demolished and its foundations became a base for new 1.4 m thick gothic walls and a new floor that was about 60 cm higher. Grand Duke of Lithuania Jogaila built this new Gothic building after the introduction of Christianity in Lithuania in 1387. The Cathedral was consecrated and dedicated to the in honour of St Trinity, St Marry, St Stanislaus and St Vladislaus.

Jogaila's church was a building of 22.6 x 22.6 m with massive contraforces in the corners and a narrow presbytery and a wooden annex on one side burned down in 1419. Lithuanian Grand Duke Vytautas soon rebuilt a high church of Gothic style of brick this time and with bigger foundations. Chapels were added to the church later on. They were built by Lithuanian nobles V.Montvydas, M.Goštautas, M.Kęsgaila, K.Jogailaitis and others. After more than 100 years the Cathedral needed major repairs, which is why it was decided to rebuild it. The rebuilding started in 1522 and was managed by Architect Annus. However, the 1530 fire destroyed the unfinished church. Four years later the work was renewed under a plan by Bernardo Zanobi, the architect of Rome, and was accompanied by his personal supervision. Unfortunately, the Cathedral that was not completely reconstructed caught fire again in 1539. After the fire Architect Giovanni Cini from Siena was appointed to manage the restoration, and already in 1557 new vaults were built. The Cathedral was built in the Renaissance style and was completely built in 1557. The foundations were not deeply laid, as a result, a fronton wall needed rebuilding already in 1596. After a huge fire of 1610 the Cathedral had to be rebuild for the third time. The rebuilding took more than 20 years. Alongside the Cathedral St Casimir's chapel was being constructed where the relics of St Casimir, who was canonised in 1603, were buried in 1636. The Cathedral burned once again in 1639 but was rebuilt soon. Vilnius was occupied and managed by Russians from 1655 to 1660. The city and its castles were destroyed and the churches plundered. The relics of St Casimir were taken away and the mortal remains of Elisabeth and Barbara, the wives of Grand Dukes Alexander and Zigmantas Augustas, were buried in the Cathedral vault.

It is thought that Vytautas' coffin was plundered and his remains destroyed at the time. After the wars, in 1666, rebuilding works began; they were lead by Architect Giovanni Salvatoris. The relics of St Casimir were brought back. The rebuilt church was baroque this time. The Cathedral and its bell tower were reconstructed under Glaubicas' projects during 1752-1754. The towers, built above the angle chapels, were narrowing towards the openwork pinnacles. This is how the Cathedral looked like until its southern tower collapsed in 1769. Vilnius Bishop Ignas Masalskis put a lot of effort to start the rebuilding of the Cathedral, which began in 1777 under the plan prepared by Laurynas Gucevičius. The works lasted from 1782 to 1792. The baroque Cathedral acquired classicism features. Gucevičius increased the length and width of the Cathedral preserving its old foundations and brick walls, inner height and hall structure.

He used the original St Casimir chapel as the basis for reconstruction and applied the dimensions of the chapel plan for other three angles of the building. An identical sacristy with a cupola was built on the eastern side, bigger oval chapels without cupolas were built on the western side and a monumental portico rose in front of the facade. In this way Gucevičius created an externally new symmetric and harmonious classicism building preserving its historical authenticity at the same time. After the death of Gucevičius in 1798 Vilnius University Professor Mykolas Šulcas did some minor alterations to the plan and completed the building of the church.

In 1801 Bishop Kosakovskis consecrated the Cathedral. The same Cathedral remained until today. Pope Benedictus XV granted the title of Basilica to the Cathedral church in 1921. The Cathedral was roofed with thick copper sheets, but in 1917 Germans stripped them off and replaced them with tar-paper (later with tin plates). The sides of the Cathedral contain galleries with six Doric columns. The sculptures of the dukes of the Grand Duchy of Lithuanian stand on the southern side while the statues of the five saints of the Jesuit Order, which were transferred from the altars of the Church of St Casimir, are on the northern side. A marble plate with an inscription in Latin, decorated with a former coat of arms of the state hangs on the external part of the wall of St Casimir chapel. The portico of the Cathedral is of Doric style. The top of it contains a figure composition (by Italian sculptor Righio) of the sacrifice of Noah after his stepping off the ark. The same sculptor is the author of the big sculptures of Abraham and Moses on the sides of the façade, and a bit smaller sculptures of four evangelists: Marcus with an angel, Math with a lion, Lucas with an ox and John with an eagle on the sides of the door. Five bas-relief scenes of the lives of the apostles are placed above the door. Thee monumental figurative statues are placed above the fronton: St Helen with a big gilded cross in the middle, St Stanislaus on the left and St Casimir of the right. Lithuanian sculptors Karolis and Kazimieras the Jelskiai created these sculptures under the picture of P. Smuglevičius and the measurements indicated by L.Gucevičius.

The 1931 flood of the Neris inundated the Cathedral square and its cellars. After that the Cathedral had to undergo a thorough repair. After World War II, in 1949, the Cathedral was closed. The sculptures that decorated the Cathedral were removed and destroyed following the approval by the leading architects of Vilnius a year later. The Cathedral itself was looted. About 4000 books were transferred to the Hall of Books. The remains of St Casimir were placed in the Church of SS Peter and Paul in 1952. The Cathedral was transferred to Art Museum, which performed a cosmetic repair and installed the heating. Pictures gallery was opened and new chandeliers were hung as the old ones disappeared in 1956.

Company H. Shube in Potsdam restored the damaged organ in the same year.

The reroofing with copper tin, the restoration of the sculptures and painting of the façade took place in 1980. The interior was restored a year later. The pictures were brought back. A deep cavity was dug out near one column in order to uncover historical ground layers that may be seen now. Art Museum had preserved the remaining undestroyed liturgical objects: tabernacles, antipediums, etc. Archbishop J.Steponavičius expressed thanks to the managers of the museum for that.

On October 23 rd 1988 the Cathedral was given back to the parishioners and Cardinal V.Sladkevičius said the first Holy Mass near the door of the Cathedral. On February 5 th 1989 the Cathedral was consecrated. St Casimir's remains were brought back from the Church of SS Peter and Paul on March 4 th of the same year. The concerns to rebuild the sculptures were raised in 1980s. The sculptor S. Kuzma reconstructed plaster models. All three sculptures were put on the roof in the autumn of 1996. There is a memorial plate of Vytautas the Great on the left side of the altar. The portrait of Vytautas the Great that was transferred from the monastery of the Augustins hangs above the plate. Now the Cathedral holds the title of St Stanislaus and St Vladislaus Archcathedral Basilica.