Performer of a musical work: Bishop's Choir of the Vilnius Holy Spirit Monastery

All panoramas of this object: Church of Holy Mother of God (3) 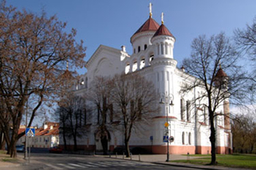 It is thought that Julijona, the second wife of Lithuanian Grand Duke Algirdas, built this orthodox church in 1346. She was buried in this church. When Vytautas the Great separated Lithuania and Western Russia as two different monopolies this orthodox church received the name of sobor (cathedral) (1415). Duke Ostrogiškis rebuilt the old crumbling church in Gothic Byzantine style in 1511-1522. Metropolitan H.Pociejus announced an ecclesiastical union signed with Pope in 1609 06 29 in this sobor. The sobor was damaged considerably during the Russian attack on Vilnius in 1794 and it had to be closed. One university bought the building and transformed it into Anatomy and Veterinary Museum in 1808. After the close of the university the building became the property of Medical Academy. Barracks were opened in the building in 1842. M.Muravjovas’ efforts helped to rebuilt the sobor under Architect A. Riazanovas’ project in 1864-1868. At the time Maironio street was built, a mill and several houses demolished, the banks of the Vilnelė strengthened. The sobor is of style. The sobor is of Georgian style. The picture of God Mother Mary, presented by Tsar Alexander II in 1870, hangs on the right column. The marble plates of the sobor contain the inscribed names of the Russian soldiers who died during the uprising of 1863.